The 14RC/EURO16 activations are now finish, we would like to thanks all RC members who take time to put their letter on air ! Thanks also to all hunters !

Now we can say we have a winner ! All infos will be publish soon …

Don’t forget to send your log to the QSL manager 14RC002 Carine, you can find all infos on this web site in 14RC/EURO2016 page.

The mysterious word was : HENRI DELAUNAY

After playing for the Paris team Étoile des Deux Lacs, he became a referee. He retired following an incident during a match between AF Garenne-Doves and ES Benevolence, when he swallowed his whistle and broke two teeth on being struck full in the face by the ball.

As a member of FIFA, he sat on its board as deputy from 1924 until 1928. Along with Jules Rimet, he was an early architect of the FIFA World Cup. He was also a very early proponent of the European Champions Cup, as early as the 1920s.

Together with Jules Rimet, he was largely responsible for the creation of the European Football Championship, the trophy of which is named after him, having first proposed it in 1927. The first tournament took place in 1960.

He was General Secretary of UEFA from its foundation on 15 June 1954 until his death. When he died in 1955, he was succeeded as head of UEFA by his son Pierre Delaunay. 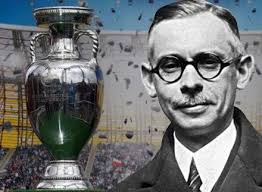